Hello guys! Today we will talk about the role of Enhancement Shamans in Mythic+. We will review every single affix that comes with the Mythic+ Dungeons and how to deal with them. Which talents should I go with? What legendaries are the best for every affix? We will answer all those questions in this post.

Bolstering: When any non-boss enemy dies, its death cry empowers nearby allies, increasing their maximum health and damage by 20%. Bolstering is all about control and taking care of high priority targets as well as keeping an eye on cleaved targets for all of them to die at the same time or pretty close to each other. Enhancement Shamans deal perfectly well with this affix as they got the control and AOE damage to deal with them. Crashing Storm and Fury of Air are both pretty good talents to take here as well as Boulderfist as it will buff every single damaging ability.

Fortified: Non-boss enemies have 20% more health and inflict up to 40% increased damage. A more AOE oriented build to deal with the increased health of non-boss enemies and control via Lightning Surge Totem are all that a Shaman needs to deal versus this affix.

Necrotic: All enemies' melee attacks apply a stacking blight that inflicts damage over time and reduces healing received. This is an affix mostly for tanks and healers to deal with. You could aid them by using your Wind Rush Totem to help the tank kite the mobs when having high amounts of Necrotic stacks or throwing some instant Healing Surges when Necrotic stacks are not high enough.

Overflowing: Healing in excess of a target's maximum health is instead converted to a heal absorption effect. An affix exclusively for healers. You could help them remove any big absorption shields by throwing some instant Healing Surges if required.

Raging: Non-boss enemies enrage at 30% health remaining, dealing 100% increased damage until defeated. Using some cooldowns on low health enemies and controlling them using Lightning Surge Totem should solve the issues with this affix. Always use Feral Spirit in conjunction with Crash Lightning when facing large groups of enemies

Sanguine: When slain, non-boss enemies leave behind a lingering pool of ichor that heals their allies and damages players. This affix is pretty easy to avoid. Just be careful when facing big groups as you may be standing over a pool left by an enemy when trying to focus another one. Kiting them away from it comes down to the tank and us helping them with our Wind Rush Totem. Be careful when using Lightning Surge Totem as if you stun the enemies when they are standing over a Sanguine pool will heal them a lot.

Skittish: Enemies pay far less attention to threat generated by tanks. It is now our time to kite. Try busting down your enemies and if you get attention from one of them try kiting him/her around or stun them. A pretty lethal affix for all melee classes in general. Teeming: Additional non-boss enemies are present throughout the dungeon. Best way to deal with this is some big cooldowns management. Feral Spirit is your best friend when dealing with large groups of enemies as when matched with Crash Lightning, the amount of AOE dealt is pretty significant. 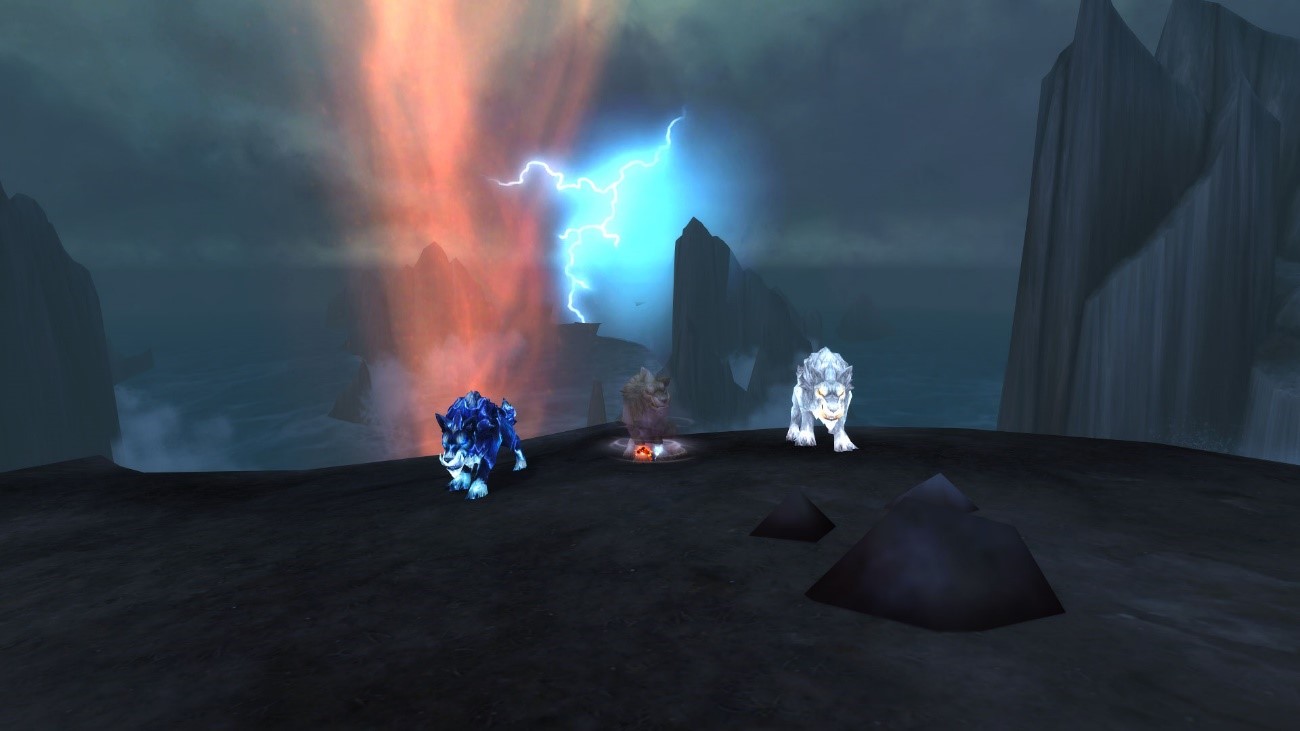 Tyrannical: Boss enemies have 40% more health and inflict up to 20% increased damage. We have not talked about bosses and how they influence a dungeon. Well, Tyrannical is a deadly affix in some bosses. Every wrong step is heavily punished so carrying some Ancient Healing Potions and using your Astral Shift cooldown well are mandatory here. If mobs in the dungeon are not that dangerous, you could go for a more single target oriented build via Crashing Storm for Stormbringer procs on single target, Hot Hand or Windsong for single damage or Overcharge if you find yourself in need of dumping Maelstrom. Notice that using Lightning Bolt needs some gameplay changes as it incurs a 12 seconds cooldown and consumes up to 40 Maelstrom.

Volcanic: While in combat, enemies periodically cause gouts of flame to erupt beneath the feet of distant players. Be vigilant when this small volcanic patches under yourself come out. Be in constant movement if you see them coming as you won't lose any damage from doing so.

Which talents should I use ?

Talents depend a lot on the weekly affixes so we will try to cover every single one's strengths and weaknesses to give you a clearer view.

Talents level 15: In terms of talents, Boulderfist is a good choice as the increased 5% damage to all your abilities should provide your AOE spells a good chunk of damage to proceed good and smooth through the entirety of the dungeon. Windsong is also good as it can deal with high priority targets quite easier in case the bosses are hard to deal with and have a 20 seconds minimum window for you to utilize your Windsong buff at its finest. Hot Hand is also good when paired with the increased 6% Haste of Ancestral Swiftness ensuring some procs on it and saving some Maelstrom as the Lava Lash proc is free of it. It also indirectly increases the amount of Doom Vortex procs (golden trait that has a chance when using Lava Lash of triggering a tornado that deals AOE in a pretty tight area) because of the free Lava Lashes.

Talents Level 30: Feral Lunge and Wind Rush Totem are up to your personal preference. The movement speed totem deals pretty well with long walks inside some dungeons and could save you some precious seconds while Feral Lunge provides yourself some good mobility for you to deal with some one-shot mechanics or get to your targets quite easier. Rainfall is not that good of a talent in Mythic+ Dungeons as it requires everyone to be standing on it to be effective and the pace of Mythic+ Dungeons are usually pretty fast for you to be using it every 10 seconds. May prove useful against bosses with party wide constant damage.

Talents Level 45: Lightning Surge Totem is always good for Mythic+ and exceptional against Bolstered or Enraged targets. In lots of enemies get the Bolstering or Raging buff, you could control them with the stun provided by the totem and bring them down while giving the tank some seconds to position himself and kite them.

Talents Level 60: Ancestral Swiftness is also our go to talent for this affix as the 6% Haste provided currently overcomes the nerfed Hailstorm and Lightning Shield.

Talents Level 75: Tempest and its two cost reduced Stormstrikes deal pretty well versus big groups of enemies as Crash Lightning encourage the usage of Stormstrike and Lava Lash. The Overcharge talent is also pretty good versus beefy bosses but not that good when dealing with big crowds of mobs as you do not want to use your Maelstrom on Lightning Bolt when facing large groups.

Talents Level 90: Crashing Storm and Fury of Air both have pretty good uses in Mythic+. Crashing Storm encourages the use of Crash Lightning even when facing one or two targets and its damage procs Stormbringer so, when paired with the Tempest talent, big chunks of AOE are coming your way. Fury of Air provides constant AOE as well as some kiting mechanic with the 30% slow. It also deals some significant single target damage making it a pretty solid choice. Sundering provides a big burst of AOE as well as some position disrupting mechanic that could prove useful when dealing versus the abilities of some uninterruptible mobs but it is mostly a not taken talent.

Talents Level 100: No second thoughts on this one. Landslide is our go to talent in the Enhancement Shaman arsenal overall. The consistent 8% increased agility is pretty strong and it just gets better as you gear up your character.

Which legendaries are the go-to ones in Mythic+?

Emalon's Charged Core (10% increased damage if Crash Lightning hits 3 or more targets) is one of the best when dealing with every Mythic+ affix. Provides a good constant 10% increased damage throughout the dungeon when facing small or big groups of mobs.

Eye of the Twisting Nether is also a pretty well rounded one as it provides a 1.5% increased damage for each elemental damage application (nature, fire and frost). It is important to notice that we won't use Hailstorm in our Talent trees anymore as it is a pretty weak choice so we will mostly be dealing just with a 3% damage increase as refreshing the Frostbrand buff is not a DPS increase even if it adds 1.5% damage.

Sephuz's Secret has its uses in all of the dungeons as the stun provided by the Lightning Surge Totem procs the 25% increased haste and 70% increased movement speed. So it can be used as a way to improve your damage during a 10 seconds window or running away from some dreaded mechanics that can one-shot you.

Akainu's Absolute Justice makes your Lava Lash deal increased damage when buffed with Flametongue and Frostbrand. As Hailstorm has been recently nerfed to the ground, meeting the requirements for this legendary to be useful are pretty hard to reach. This legendary currently has little good use.

Spiritual Journey has a pretty high potential when dealing with fights with high movement or downtime. It makes your Feral Spirit cooldown recharge 500% faster when in Ghost Wolf Form (around six seconds instead of one). You should not spend time as Ghost Wolf when there is the chance for you to deal damage. It should only be used when trying to reposition yourself, during long walks or some immune boss phases where you can run around if nothing else to do is required.

Uncertain Reminder is a new legendary for Shamans introduced in patch 7.1.5 that provides a 75% increase in Bloodlust. It makes Bloodlust go up to 70 seconds instead of 40 and is pretty well used when facing high windows of burst damage where Bloodlust is most effective. This is a pretty good single target legendary as the other ones are not that good when dealing just with one target. Pretty good against Tyrannical affix when needed to bring down a boss with huge amounts of Hit Points.

Kil'Jaeden's Burning Wish is a new trinket introduced in patch 7.1.5 too that provides a big flat amount of Agility, secondary stats and a powerful on use AOE ability on a 1.15 minute cooldown. This deals pretty well in Mythic+ as mobs will nearly always be clumped up and this trinket could prove pretty useful when dealing with them. If you are lacking gear, relics, trinkets or want to roll the dices for some juicy legendaries drops, remember you could always count on our Mythic Boost services be it on any Legion Raid or Mythic+ Dungeons. You could also hone up your skills by testing what you have learned with other skilled players with our self-play service!

This is all for now for Enhancement Shamans and Mythic+. Next week we will be talking about Windwalker Monks and Mythic+. What talents and legendaries to use and which affixes favour us the most will be included in it. Until next time!